It's the first time that I look forward going back to school.
It feels like one's first date more or less... :-)
Αναρτήθηκε από Greekteacher στις 1:30 μ.μ. 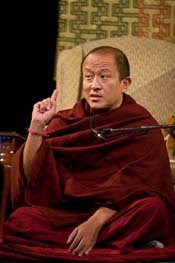 This twenty-one minute sound file, taken from a youth audience (ages 13-27) with Khyentse Rinpoche, is presented "here" with the permission of Dzongsar Jamyang Khyentse Rinpoche. The audience took place in Halifax on 29 November 2008.

Excerpts from the audio file

On growing up too fast

So, today I have something to tell you, that is especially for the teenagers, especially. I don't know whether you realize this, this is really important. It's ... important is not the right word. I don't know what to say. I'm trying to fish for a word.

There is something so incredible about being young. I made a mistake by trying to grow up fast, and I'm sure there are a lot of other people who have made the same mistake. Please for your own sake, do not grow up fast, because you can never rewind and play back. Once you play, that's it!

But this is easier said than done, no? ... a whole society, books, television, movies ... all trying to make you grow up. And you yourself, as a human being ... human nature is competing: "Who will grow up fastest?" I'm sure you even tell yourselves sometimes, "Grow up! C'mon!" ... not the right thing to do.

On discipline and depression

OK. One last word. Now, I hate to use the word discipline. The trouble is this is the one thing that you don't want to hear, discipline ... But even to make a cappuccino, you need a discipline ... you need a discipline, of course. Skateboarding, all these things, they all need discipline. In our modern society, one of the biggest problems is depression, really really feeling down and depressed, and people turning to drugs and alcohol and all of that. If you really look into the root of the depression, it is because of lack of discipline.

Discipline is so important ... And when I say discipline I'm talking about something so simple, huh? I'm not talking about like getting up in the morning, 5 o'clock ... you know, like things like that ... You make your own discipline, such as, I don't know ... something like, "I will not go to Starbucks on Wednesdays." Really, if you took that kind of vow, something as simple as this, in the future, the ratio of visits to your shrink will be definitely reduced. Even as simple as not going to Starbucks on Wednesday. I'm serious. I'm serious ... If you can manage ... if you do that one year, good! Very good. You have learned the art of controlling yourself.

If you want to be brave (you know, maybe you think, not going to Starbucks on Wednesdays would be too simple for you) then take a vow: Next six months, whoever it is, you will not yell at them. That's a difficult one, huh? That's a difficult one ... But it will give you amazing, amazing power. Because ... you all want to be indestructible, don't you? Well, if you want to be indestructible, why volunteer yourself, to become an easy target? So, you can become very brave and take that kind of vow also.

Question: If we were take a vow, for six months never to yell at somebody, how would you be ... you know, sort of approach a possible inevitable failure, or how should you approach this ...